The idea for Eyes Wide evolved as I was sitting by a friend's bonfire watching sparks leap into the air. It's about life that is hidden away in the night, but going on just as it does in the day. The ideas come quickly, but I stay with them for a long time before they're a song. Before I am happy with the music and words.

My first tour was a little scary at the start, but I feel I am in the right place – at home – when I’m on the stage. After all the hard work writing and recording and practising, it feels worth it when you get up there and sing your songs. It’s like you are living your album. The feedback is great, too. When you sense people enjoying the music, you enjoy singing it more too. The album launch in Stroud was fantastic. People came from all over the country to see me, and it felt such an achievement.

I've always been singing, at home, in a church choir, in my bedroom. My dad was in a band in his spare time and after he died no one touched his guitar until the day I picked it up and taught myself to play. I loved the process, and some of the songs I wrote then helped me make sense of what had happened - my dad had terminal cancer - and how I was feeling about our loss. Then my brother bought me my own guitar and here I am...and my brother sings on my first single which is great.

I am conscious that the first album was rooted in the loss of my dad, from a place and time when I didn’t really know what was happening and I was slightly lost. My newer songs are more accepting, and so have a different feel to them, but his words still ring in my ears . I picked up my guitar because of him, and I can hear him singing as I play. That’s really nice. In fact I’m recording my first cover, a song we all love and that he used to sing to me.

I’m listening to Ben Howard at the moment – my favourite track’s Gracious – and I have to say if I could sing a duet with anyone it would be him. I love new artists, and I love some folk singers from way back. Like Melanie Safka. My mum used to play her all the time so she was one of the first female artists I ever listened to, and as I started to write I wanted to write like her.

I meet a lot of students who, like me, would love to write and sing for a living. It is hard, I know, but I think it’s good to decide you are in for the long term and to know it’s rarely a short journey. My advice is always keep going – keep writing.  I also remind those who ask that everyone writes songs that never see the light of day – but they inform the next ones, the ones people are going to want to hear. You learn from your mistakes.

I started to think about the second album as soon as the first was released, and I am writing all the time. But I won’t be recording it until next year...so watch this space. 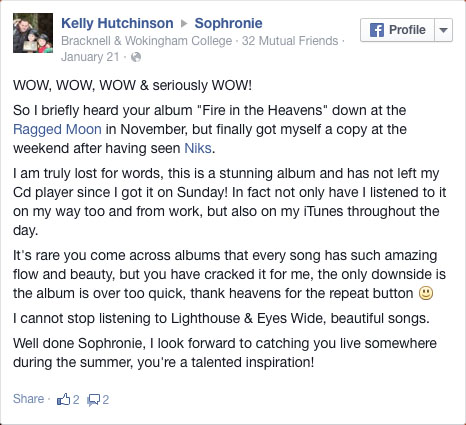